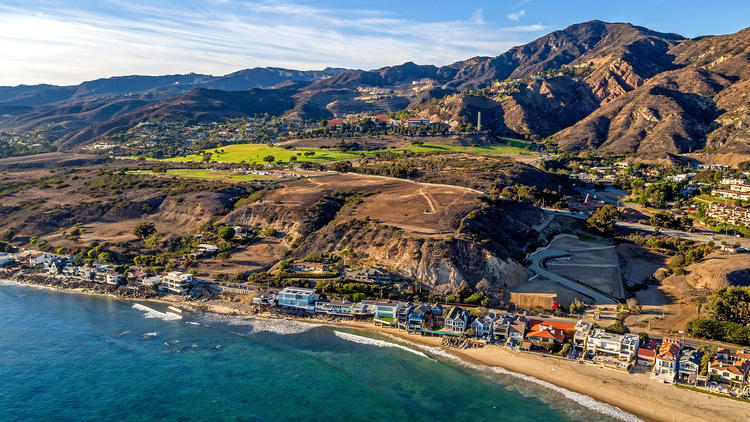 The sale of a storied Los Feliz estate and a $50-million exchange in sunny Malibu were among L.A. County’s priciest real estate transactions in June.

The Crummer Estate, an undeveloped, 24-acre property on Pacific Coast Highway, sold in Malibu’s third priciest deal of the year to speculative developer and Unvarnished founder Scott Gillen. It had been listed for $60 million, records show.

Set on a bluff overlooking Malibu Colony, the plateau is surrounded by 360-degree mountain and ocean views. Gillen intends to work with architect Richard Landry to created a new gated enclave consisting of five single-family homes.

Homes in the enclave, dubbed “The Case,” will range from 10,500 square feet to 13,500 square feet, with lot sizes ranging from 2.45 to 5.78 acres. Landry, whose projects include some of L.A.’s largest modern mansions, previously designed layouts for each of the individual houses as well as the viewing corridors.

Built in 1993 and freshly renovated, the Mediterranean villa-style home has six bedrooms and seven bathrooms in about 11,600 square feet of living space. Features of note include a living room with wet bar, a study/lounge and a center-island kitchen. A large wine vault sits across from the breakfast room.

Outdoors, a 2,000-square-foot pavilion with wood-vaulted ceilings, a secondary kitchen and large common area sits next to the swimming pool. A spa, a lighted tennis court, lawns and mature trees also lie within about 2 acres of grounds.

Mauricio Umansky and Farrah Aldjufrie of the Agency were the listing agents. Drew Fenton and Justin P. Huchel of Hilton & Hyland, an affiliate of Christie’s International Real Estate, represented Leibel.

The onetime home of early filmmaker Cecil B. DeMille sold in the gated Laughlin Park community to Oscar-winning actress Angelina Jolie for $450,000 less than the asking price. It had been listed for $24.95 million, records show.

The 2-plus-acre compound was home to DeMille for roughly 40 years and, after his passing in 1959, maintained by the movie mogul’s family for another three decades.

Surrounded by gardens, specimen trees and sitting areas, the estate centers on a classical-style main house with six bedrooms and 10 bathrooms in 11,000 square feet of living space. Also within the grounds are a swimming pool, a pool house and a guesthouse with a separate entrance.

Brett Lawyer and Rayni Williams of Hilton & Hyland, an affiliate of Christie’s International Real Estate, were the listing agents.

In one of L.A.’s priciest condominium sales of the year, a full-floor penthouse at the Century changed hands for a little more than $2,146 per square foot.

Found on the 40th floor of the Robert A.M. Stern-designed building, the unit features floor-to-ceiling windows, a living room with two fireplaces and a center-island kitchen. The formal dining room has seating for 25 guests.

The open-space master suite has multiple sitting areas and a lavish bath for a total of four bedrooms, 7.25 bathrooms and a powder room.

Views from the residence extend from downtown L.A. to the Santa Monica Mountains to the ocean.

The property had been listed for $26.5 million before the sale, records show.

Jonathan Dolgen, former head of Paramount Pictures, sold his home on Malibu Colony Road to film director Chris Columbus of “Home Alone” and “Mrs. Doubtfire” for $500,000 less than the asking price of $18.5 million.

The English traditional-style home sits along a 48-foot stretch of sand in gated Malibu Colony and has coastline and open-water views.

A brick courtyard leads to the entrance of the house, which has a great room, a chef’s kitchen, a step-down wine cellar and a screening room in 6,343 square feet of space. Including the guesthouse, there are five bedrooms and six bathrooms.

Outdoors, steps lead to a spa that sits level with a wide swath of decking. Transparent guardrails take in the surf and surrounding beachfront.

Jack Friedkin and Leonard Rabinowitz of the Agency were the listing agents. Christopher Cortazzo of Coldwell Banker Residential Brokerage represented the buyer.