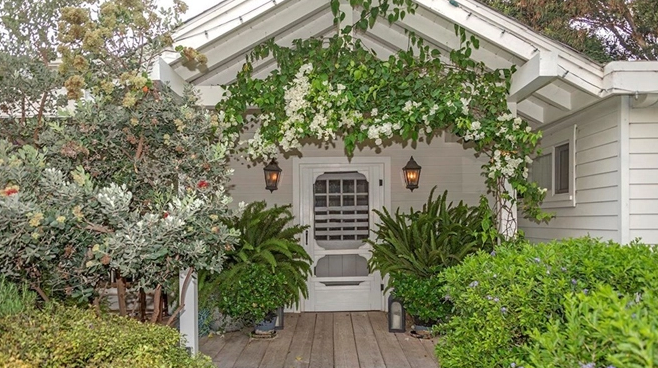 YOUR MAMA’S NOTES: Peri Gilpin, best known for her role as sassy, sardonic and proudly promiscuous radio producer Roz Doyle on the heavily syndicated sitcom “Frasier,” and her husband of nearly 20 years, painter Christian Vincent, listed their homey compound above Malibu’s prestigious Broad Beach at $3,899,999, a figure otherwise known as $3.9 million. The couple purchased the 1.2-acre spread in August of 2013 for $2,540,000.

The gated property, surrounded by more than 50 olive trees, is anchored by a rambling, vaguely Cape Cod-style main house that dates to the late 1940s with three bedrooms and two bathrooms in 3,741 square feet. The property also includes a small, detached guesthouse with another bedroom and bathroom plus, tucked up at the back of the property with a separate gated driveway, an approximately 1,600-square-foot shed-like art studio with a sky light topped 17-foot-high ceiling.

The front door of the main house, set into a welcoming porch filled with potted plants, opens casually but less than ideally into a spacious, open-plan combination living/dining/kitchen with rustic-luxe matte-finished wide plank hardwood floors, a vaulted ceiling and a row of over-sized 18-pane windows. A huge, freestanding double-sided fieldstone fireplace divides the living room from the ample dining room and the small but smartly arranged kitchen is open to the living room over a doublewide butcher block topped center island with integrated snack bar. Large enough to comfortably accommodate a baby grand piano along with a couple of slip-covered sofas and a couple of vintage leather club chairs, a second floor family has an entire wall of built-in bookshelves and glass sliders to a trellis-shaded deck with sweeping whitewater and coastline views.

The compound’s picturesquely laid-back grounds includes expansive lawns and mature gardens, a raised-bed herb and vegetable garden outside the kitchen, a classic covered porch outside the living and dining room, a stone-paved and pergola shaded dining terrace with built-in barbecue, and a swimming pool and spa with a through the trees ocean view. 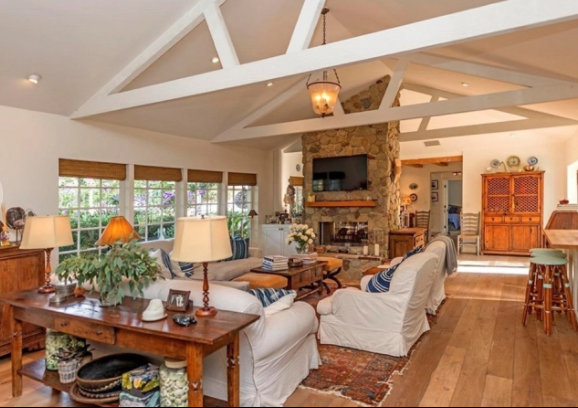 The Gilpin-Vincents previously owned a modestly sized but hugely expensive cottage inside the hallowed guarded gates of Malibu’s celeb-favored Colony enclave that was purchased in July 2010 for $3.55 million from Shabby Chic queen Rachel Ashwell and sold in July 2013 for $4.25 million to New York City-based investor Alan J. Patricof.

Since her seminal role on “Fraiser,” Miz Gilpin has appeared in large and small roles in dozens of films and television shows including “Mr. Robinson,” “Scorpion” and “Broad City.” She also has a handful of projects in the hopper that include the comedy film “The Outdoorsman,” the feature length drama “Only Humans” and the comedy movie “Benjamin” with Mary Lynn Rajskub and Rob Corddry.