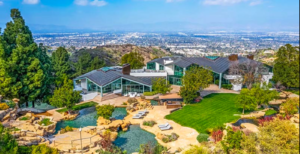 Not many houses look like Pharrell Williams’. The ultra-modern compound — covered in glass and perched on four acres overlooking L.A. — just hit the market for $16.95 million in the Beverly Hills Post Office area.

The architectural estate is a world of its own, as koi ponds and waterfalls dot the grounds around the hilltop home. Almost every space, both indoor and outdoor, enjoys sweeping views of the city and canyon below. 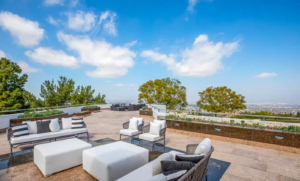 If it sells, it’ll cap a two-year stay for the Grammy-winning artist, who paid $15.6 million for the estate in 2018. He bought it from actor-filmmaker Tyler Perry, who had owned it for less than a year.

A 200-foot driveway approaches the mansion, which is fronted by a 30-car motor court. Custom-built in 1992, the dramatic abode has 10 bedrooms and 11 bathrooms in more than 17,000 square feet.

Steel beams cut through expansive walls of glass across the exterior, creating a visually striking space that could serve well as a supervillain’s lair. Inside, pyramid skylights and jagged lines continue the aesthetic. 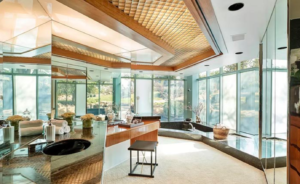 Atrium-like common spaces include a foyer with a reflecting pool, a great room with a snaking marble stairway and a formal dining room with a crystal rock chandelier. Wood accents touch up the master suite, which opens out to the landscaped grounds.

Out back, lawns and patios surround a resort-like pool with a waterfall, slide and grotto. Rock sculptures, dining terraces and a sports court complete the property.

A singer, rapper, producer and fashion designer, Williams, known simply as Pharrell, formed the hip-hop production duo the Neptunes in the mid-’90s and started the band N.E.R.D. later that decade. He’s won 13 Grammys and received two Oscar nominations, including one for his hit song “Happy.” 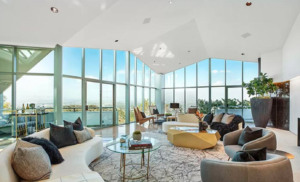 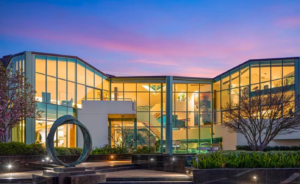 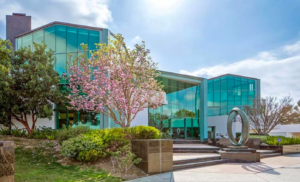