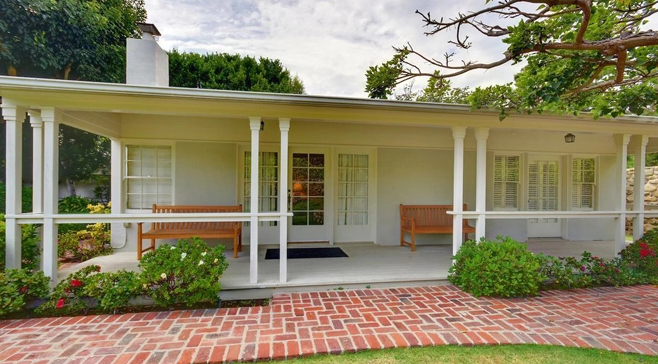 YOUR MAMA’S NOTES: Quick on the internationally publicized heels of his ten-plus acre über-luxe estate in Bel Air hitting the market with a vertigo-inducing price tag of $350 million, one of the many properties in Malibu’s exclusive, guard-gated Colony enclave owned by recently deceased media tycoon A. Jerrold “Jerry” Perenchio has come up for sale with an asking price of $5,495,000.

Tax records show the property spans nearly one-third of an acre on the landward side of the enclave — meaning it’s not ocean front — and includes a pint-sized cottage that dates to the early 1940s and measures in an apartment-sized 936-square-feet with just one bedroom and one bathroom. There are, per marketing materials, two more bedrooms and a bathroom attached to the back of the detached two-car garage. The main house, picturesquely positioned at the rear of the lot in verdant garden, has a deep, house-wide front porch for whittling away hot summer days in the shade, a combination living/dining room with white brick fireplace for taking the damp edge of foggy mornings and cool seaside evenings and a compact kitchen with blue and white ceramic tile counter tops, simple white cabinets that look as if they might be original to the house and a full suite of up-to-date stainless steel appliances. The property, which backs up to late Mister Perenchio’s not quite ten-acre private golf course, sits behind a secured entry gate set into a brick wall and features a number of mature shade trees, tremendous expanses of mown lawn perfect for croquet and badminton, rustic stacked stone walls and several brick terraces and pathways bordered by carefully clipped boxwood hedges.

Mister Perenchio’s Colony holdings additionally include several other landside properties, at least two of which contain tennis courts, plus two, side-by-side oceanfront homes. More than a dozen years ago, as part of a negotiated agreement with the mightily powerful California Coastal Commission who, along with a number of other environmental groups, was not at all pleased he developed the three-parcel spread into a golf course without the proper permits, the Bel Air -based Malibu land baron agreed to donate his well irrigated and painstakingly manicured recreational oasis to the state of California after his and his wife’s deaths.

The self-made multi-billionaire, a former talent manager and sports promoter who’s net worth was estimated at around $2.8 billion at the time of his March 2017 passing, teamed up in the mid 1970s with Norman Lear and Alan “Bud” Yorkin on Tandem Productions, which turned out a long string of ground-breaking sitcoms that included “All in the Family,” “Sanford and Son,” “Maude,” “The Facts of Life,” and “Diff’rent Strokes.” He later and briefly owned the Loews Theater Chain and, in the early 1990s, he partnered with Mexican media mogul Emilio Azcárraga Milmo to acquire the Spanish language Univision television network that they sold in 2007 for $13.5 billion to investor Haim Saban’s Saban Capital Group, Inc.