By Maya Silardi / Special to The Malibu Times 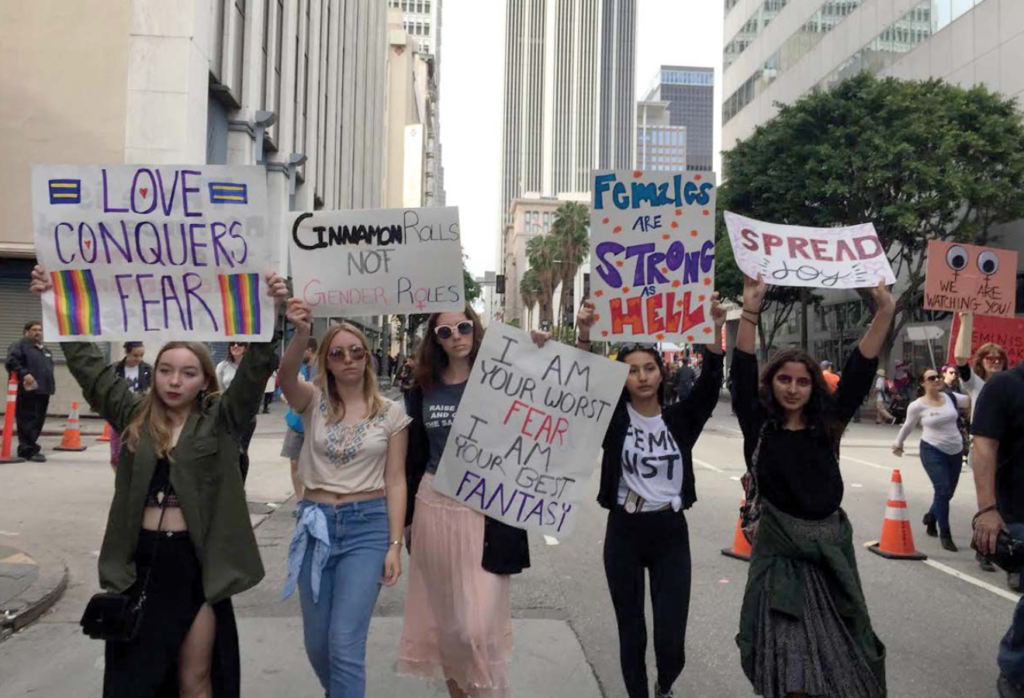 Last Saturday, Malibu youth took to the streets of Los Angeles and Washington DC., to peacefully protest among friends and family in the historic Women’s March.

After what countless news sources are deeming the biggest one-day protest in United States’ history — totalling well over 2.9 million participants worldwide — the Women’s March has reached men, women and families across the globe. While political participation often is left to the adults, the Women’s March propelled a whole new group to become active: The youth.

“I can’t vote, so participating in rallies like the Women’s March is beneficial as it can show that even if we can’t vote we want our voices to be heard,” Malibu High School junior Olivia Thonson said. Thonson traveled to Washington, DC., alongside her mother to take a stand on issues she is passionate about.

Among this next generation of community members who participated in the marches was a group of mothers and daughters from the local preschool, Under the Oaks. Although not organized through the school, various parents and teachers from the nursery and their children attended the Los Angeles march, including Under the Oaks co-owner Sunshine Armstrong-Silverston and her six year-old daughter Victoria.

Following her mother’s example, Victoria was eager to make a sign to contribute to the event. She brought her sign, which read “Love Stop hating People,” to the rally.

Originally, Armstrong-Silverston noted that she did not want her daughter to be exposed to racism, discrimination and sexism at such a young age. However, with the past election, it was difficult to avoid the topic with curious Victoria. When Armstrong-Silverston asked why she wanted to come along, the six year-old noted, “[President Trump] was being mean and we wanted him not to do that and we wanted women’s rights. I am a fairy and we don’t do mean things.”

Rebecca Barling, a teacher at Under the Oaks Early Childhood Center, also was present at the Women’s March in Los Angeles with her husband Willy Barling and her nine-year-old twin daughters, Loretta and Roxanna.

“As a teacher, mother, daughter, wife and sister, I felt it was a life lesson I could teach [my daughters]. We had a lot of important conversations leading up to the march. I felt they were mature enough to understand a lot of the key reasons why women across the world were marching,” Barling explained. “I felt so much unity and love marching with my girls.”

Various other Malibu youth attended the rally as well, many of whom came from Malibu High.

Seniors Armyan Nispel and twin brother Bruno, along with friend John Pietro, attended the march in Los Angeles the day after Trump’s inauguration as well.

“I went to the Women’s March because I feel that it is important for men to show support for women. If we want our society to change in a way that regards men and women as equals, it is important that we stand side by side and work together,” Armyan Nispel stated.

“We live in a world that is, and always has been, dominated by men — usually white men, at the expense of nearly every other demographic imaginable,” Pietro added. “It is our responsibility as men to acknowledge this, as failing to actively participate in the dismantling of the patriarchal system in which we were born in is contributing to the continuation of this system.

“By standing with women and realizing that while acknowledging our privilege as men can be difficult and scary, living in a society where you can be deprived of certain freedoms and opportunities from the day you are born is scarier still,” he said.

“It was really one of the best experiences of my life. To be around so many like-minded people that were willing to stand together against something so dangerous was really amazing,” Beauvoir said.

Aldrich, who attended the march with her mom and best friend’s family, further added, “As a member of the younger generation, knowing that my generation will be the most affected by the decision making of the president, I think it is very important to attend the rallies. For the first time in my young life I am realizing how important it is to stay involved and be as active as I can.”

“The younger generation is going to have so much power very soon and it is important that we start making our voices heard now,” Kunerth concluded.