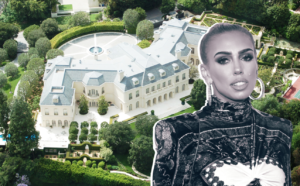 After three years on the market and a 40 percent price chop from its original asking, the palatial estate has sold for $120 million.
Despite the price chops, the deal is the most expensive home sale ever in Los Angeles County. The previous record was held by Hard Rock Cafe founder Peter Morton, who sold his Malibu home for $110 million last year.

The seller, Petra Ecclestone, is heiress of the Formula One racing empire. She had been looking to unload the 56,500-square-foot home in the tony Holmby Hills since 2016. Ecclestone originally listed the estate for $200 million, and most recently dropped its asking to $160 million in May.

Originally built by film and television producer Aaron Spelling, the French Chateau-style home on Mapleton Drive sits on a 4.6-acre spread. In addition to its 123 rooms — 14 of which are bedrooms — the property includes a tennis court, swimming pool with spa and koi ponds.

Ecclestone, daughter of billionaire Bernie Ecclestone, paid Candy Spelling $85 million for the property eight years ago. She hired some 500 workers to renovate it, adding a bowling alley, silver storage room, nightclub and tanning rooms among other amenities.

Sources said Ecclestone has been looking to downsize to a smaller home in Brentwood. She also owns a house in London.

The mega-deal comes as a number of ultra high-end homes in L.A. languish amid a cooling market. Owners and spec home developers, who had been caught up in what some industry pros have termed as “aspirational” pricing a couple of years ago, have had to lower their expectations.
Developer Bruce Makowsky in January dropped the price on his so-called “Billionaire” Bel Air mega-mansion a second time, to $150 million from its original $250 million asking. That also represented a 40 percent price cut.

Meanwhile, the most expensive listing in L.A. County on the Multiple Listing Service, the Chartwell Estate, has remained unsold. That 25,000-square-foot residence in Bel Air, owned by the late media mogul Jerry Perenchio, received another $50 million price chop last week, bringing its ask to $195 million. The estate hit the market as a $350 million pocket listing.