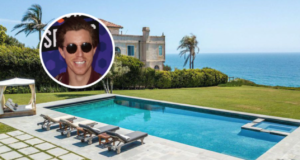 Summer is upon us, and with the heat traditionally comes swarms of qualified buyers seeking an oceanside investment. Shaun White is hoping at least one of them will take a shine to his cliffside two-house compound in Malibu, which has just popped up for grabs with a heavy-duty total asking price of $27.25 million. One with a $14.5 million ask and the other at $12.75 million. Both feature just over an acre of land on what is arguably the most fashionable avenue in the celeb-favored Point Dume neighborhood.

Should both houses sell for anywhere near their current price tags, White will realize a substantial return on his investment. Records show the 32-year-old Olympian skateboarder/snowboarder-turned-apparel entrepreneur paid just under $20 million for the two properties in two separate transactions, the first in 2013 and the latter in 2016.

Although the property does not currently sport a swimming pool pool, the terraced backyard features unstoppable sunset views over the Pacific Ocean and a long private stairway leading down to Westward Beach. There’s also an outdoor jacuzzi and — on the opposite side of the home — an al fresco dining area with fire pit and BBQ.

And just over yonder wall is the guest house property, currently saddled with a $12.75 million ask. Back in late 2016, White paid Dictionary.com founder Brian Kariger $10.75 million for the house, which was also once owned by the aforementioned Fleiss.

The modestly sized, vaguely Craftsman two-story home features just under 2,200 sq. feet of living space and is invisible from the street, discreetly tucked behind gates and towering hedges on a bluff with head-on sunset views over the ocean.

Like its next door neighbor, the structure’s living spaces are finished with glossy hardwood floors and a tongue-and-groove wood ceiling. There’s a combo living and dining room with fireplace and terrace access. Two bedrooms on the upper floor share a marble bathroom; the lower-level family room has a hidden sleeping nook accessible by a short ladder through a window-sized portal. The expansive kitchen has countertops finished in matte black contrasted with crisp white custom cabinets and chic designer appliances, while nearby French doors open to a trellis-shaded terrace with a barbecue. Just beyond that is a rather giant swimming pool set into a well-irrigated lawn that sweeps down to the bluff’s edge.