Octogenarian self-made billionaire Sheldon Adelson — the world’s 17th-wealthiest human, per Forbes — seems increasingly intent on buying up all of Malibu Colony, the guard-gated oceanfront community legendary for its slew of famous past and present residents. In a deal that closed today, he’s sliced out just over $14.7 million for his eighth property in the neighborhood.

Over the last few years, Adelson — who’s owned a custom-built Colony vacation home since the 1990s — has famously spent nearly $70 million buying up additional properties in the gated enclave. Not all of the newly purchased homes are contiguous, though this latest acquisition does happen to sit directly between two other oceanfront houses already owned by Adelson.

Built in 1930 but since extensively renovated, the nearly 4,000 sq. ft. structure is done up in a “French Country Villa” style, per the listing. There are four bedrooms and four baths, a two-car attached garage, an open-concept great room with fireplace, and a gourmet kitchen with one of those fiendishly expensive La Cornue ranges.

Other amenities include a media room, an elevator, an ocean-view master suite with a private terrace and outdoor hot tub, and a finished attic that services as a spacious office. The main level also has a sprawling outdoor patio with a fireplace and BBQ station, while a short flight of wooden leads down to the sandy beach.

The property was sold by a non-famous woman who had owned the house since 2001, when she and her longtime husband — a real estate investor-turned-vintner — bought it from actor-turned-environmentalist Ed Begley Jr. Some of the other neighboring Colony homes — the ones not yet acquired by Adelson, that is — are owned by Sting, Rob Reiner, Tom Hanks and Rita Wilson, Paul Reiser, Pamela Anderson, Jason Statham and John McEnroe.

Adelson, a majorly influential donor to Republican causes, and his family have a well-documented penchant for outrageously lavish real estate. Besides his eight-property vacation compound in Malibu, there’s also his main residence: a titanic, custom-built megamansion in Las Vegas that reportedly weighs in with more than 44,000 square feet of interior space and sports its own private waterpark, not to mention 20 bathrooms.

And back in 2015, Adelson’s stepdaughter Yasmin Lukatz forked out $35.3 million in cash for a sprawling spec-mansion up in the shockingly expensive Silicon Valley town of Atherton, Calif. 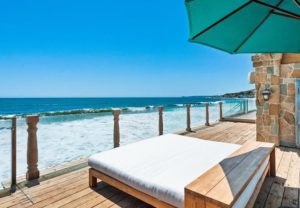