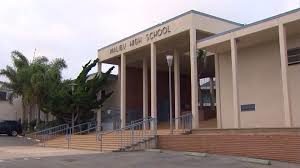 Carey Upton, Santa Monica-Malibu Unified School District (SMMUSD) chief operations officer, once joked that by the time Malibu High construction was due to end, everyone would give up and decide they want a new campus. After the SMMUSD School Board’s last meeting on April 12, it seems one step closer to reality.

Three hours into the meeting, Upton presented updates to the polychlorinated biphenyls (PCBs) removal progress at Malibu High School. The presentation was originally going to take place sometime in February or March; however, as things “progressed and shifted,” he centered the presentation around this question: “Is it really prudent to continue spending money abating PCBs on buildings that don’t really support the education of our students in Malibu?”

PCB issues aside, the problem stems from the ’60s, when Malibu High was first built as a middle school. Though it was converted to suit high school students, the facilities remain lacking “to support student learning in the 21st century.”

Upton asked whether Superintendent Dr. Ben Drati and staff should explore tearing down the MHS campus completely to support this goal.

In response, Board Member Maria Leon-Vazquez had this to say: “ … We shouldn’t even be asking that question. I’m hoping that we are building 21st century schools. Because if we’re not, what are we doing?”

With abatement and modernization in progress, Upton described four plans for the next steps in the process.

Each plan also hinges on a 2016 court case, where SMMUSD was mandated to replace pre-1979 door and window frames at MHS and Juan Cabrillo Elementary School—or cease using the affected buildings completely—by Dec. 31, 2019.

Rebuilding Malibu High completely would take around four years, according to Upton’s estimation. It would also most likely require a hearing before the City of Malibu and the California Coastal Commission, both of which have posed challenges to MHS construction in the past.

Through back-and-forth among board members, certain members, including board members Craig Foster and Laurie Lieberman, understood the Malibu perspective better than others due to their involvement in committees involving Malibu representatives. SMMUSD School Board President Dr. Richard Tahvildaran-Jesswein asked for all board members to be brought up to speed, ultimately deciding that Upton and the Facility Division should further explore the implications of these plans.

The item is scheduled to be discussed in detail at the next school board meeting on Thursday, May 3, in Malibu.