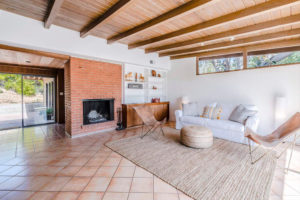 Word on the Celebrity Real Estate Street via covert communiqué from always in-the-know property gossip Yolanda Yaketyyak is that Oscar winning “Her” filmmaker, accomplished photographer, acclaimed music video director and occasional actor Spike Jonze, creative director of Vice Media and its multinational TV channel Viceland, splashed out $5.85 million for a vintage mid-century residence in Malibu, California’s Point Dume area. The ranch-style residence, a low-slung post-and-beam built structure built in the mid-1950s at the end of a long and gated gravel driveway on a tree-shaded acre with a coveted deeded key to the locked gates that keep non-residents from accessing one of Point Dume’s all but unspoiled and never crowded beaches, measures in at 1,965-square-feet with three bedrooms and two bathrooms.

nterior spaces, which are no doubt headed for a bespoke makeover, include a slim entrance gallery and combination living and dining room with practical if ordinary beige ceramic floor tiles under foot, a slightly pitched exposed wood ceiling over head and an austere, minimalist-minded red brick fireplace. Separated from the dining area by a peninsula countertop, the open kitchen is updated with solid-surface countertops on utilitarian white cabinetry with average quality up-to-date stainless steel appliances and what was originally an attached two-car garage is now a large den/family room with glass sliders to a wind-protected courtyard terrace.

Across the graveled motor court from the front of the house there’s a detached three-car garage and the living/dining room opens through a wide bank of glass sliders to a large, southeastern terrace and an even bigger sweep of lawn bordered by a low, river-rock wall. Below the lawn area there’s a built-in fire pit surrounded by built-in seating along with a couple of sheds for lawn equipment and beach gear and plenty of room for extensive gardens, a swimming pool and or tennis court.

Jonze, director of a recently released four-minute short-film advertisement for Apple’s HomePod featuring FKA twigs and a 2016 and 2017 Emmy nominee in the Unstructured Reality category for Viceland’s docu-series “Gaycation,” has long maintained a bi-coastal lifestyle. In Los Angeles the off-beat and self-effacing showbiz hyphenate, Maryland-bred great-grandson of direct mail and catalog magnate Arthur Spiegel, owns an A. Quincy Jones designed residence sequestered behind gates on a slender promontory with head-on western views of the Griffith Park Observatory that he scooped up in 1997 for $1.125 million and once-upon-a-time shared with now ex-wife Sofia Coppola; And in New York City he keeps a 2,590-square-foot condo on a high floor of an historic, early 20th-century Beaux Arts building in Manhattan’s Lower East Side he picked up in 2006 for a smidgen less than $2.65 million.