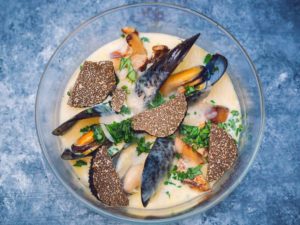 Biancaniello’s 12-seat restaurant, Mon Li (named after the wife of Calamigos owner Glen Gerson), is scheduled to open July 5. Mon Li is about the land, not just at the Beach Club but also at the much larger Calamigos Guest Ranch about ten miles away, where Biancaniello might grow crops in the future. It’s also about what’s next to Biancaniello’s cabin in Topanga Canyon, where he’s grabbing wild watercress and wild water mint out of the creek. He’s grown his own parsley and mint in that creek. He just threw Cuban oregano seeds and red shiso seeds into the water.

Mon Li is also about the Pacific Ocean, a quick stroll away from the restaurant. Biancaniello loves foraging and recently found goose barnacles, some of which he steamed with wine and garlic. He’s having the goose barnacles tested to make sure they’re safe to serve.

Mon Li will offer what Biancaniello’s calling a 12-course “liquid tasting menu.” The restaurant will be open on Thursdays, Fridays, and Saturdays, with two seatings a night. Guests will start in a courtyard where Biancaniello will be behind a grill, cooking items like fish, mushrooms, and vegetables that will be paired with a welcome cocktail. This will be the first course.

Then it’s off to a 12-seat counter, where Biancaniello will cook with induction burners. He’ll serve ten small courses of alcoholic sips, the equivalent of two-and-half-to-three drinks. There could be, for example, a progressive Caesar salad in five different vermouths.