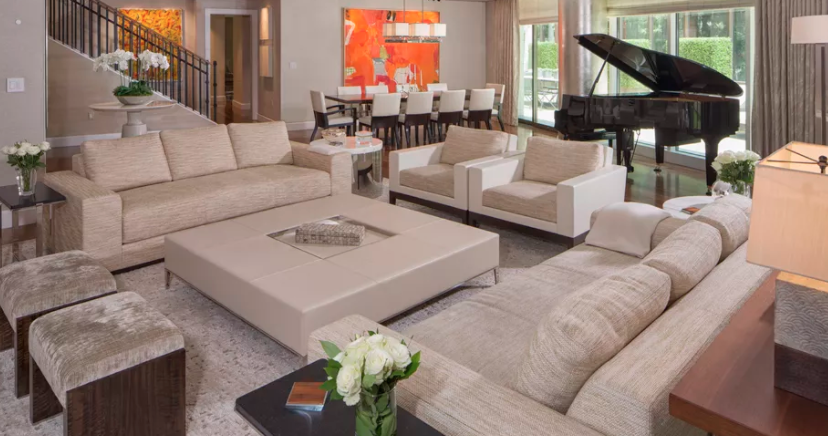 The 6,020-square-foot condo was designed by Todd-Avery Lenahan.

The paparazzi-proof high-rise contains a pair of three-story townhouse units, one of which has just come on the market with an asking price of $9.995 million.

Per the listing, the 6,020-square-foot unit’s interior was customized by Todd-Avery Lenahan, designer du jour of swanky spaces for the Four Seasons, Ritz-Carlton, and Wynn hotel chains.

Soft-rockin’ a subdued palette of creams and taupes, the condo has four bedrooms and five and a half baths. Its features include hardwood floors, marble countertops, fabric-bedecked walls, a iPad-controlled Crestron sound and lighting system, and a private wraparound terrace with fireplace and lounge area.

With the monthly HOA fees of $4,585 comes a raft of deluxe amenities, including 24-hour security, valet, doorman and concierge services; a 75-foot-long swimming pool; a plush screening room; yoga and Pilates studios; and a wine-storage facility.

A stronger selling point, however, may be the building’s proximity to the newly remodeled Westfield Century City mall, just a minute’s chauffeured-town-car ride away.