Top 25 Beach Towns In California; Did Malibu Make The Grade? 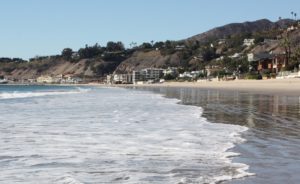 Living by the beach, strolling the sand every morning with your cup of coffee and drinking in that luxurious ocean air is a dream for many. In California life on the water also means a deep pocketbook. According to a recent survey of 205 cities across the country, Wallethub recently compared cost of living, median income, housing costs, property taxes, water temperature, nightlife, restaurants, coffee shops and crime as factors to figuring out the best beach towns to live, work and play for 2018.

Experts reviewed over 200 beach towns on both coasts against 58 metrics, where cities with populations of between 10,000 residents and 150,000 residents with at least one beach listed on TripAdvisor were matched against each other .

According to the experts, Lawrence Colorito, Senior Managing Director of Valbridge Property Advisors advises property buyers to use their head, while others suggest you choose with your heart. Colorito explained that one of the prime factors of beach property was whether or not you plan on renting by the week to vacationers.

Look for that return on investment, he says. “Don’t just look at the price,” he said. “Larger, better-located properties may cost more but also tend to rent for more and may provide a better return.”

Also, year-round population vs. seasonal population is something to consider.

If a second home or a retirement goal is your plan, whether or not a town is active off-season may not be as important as if you are planning on living and working in a beach town, according to Corolito.

According to Wallethub’s city Lahaina, Hawaii ranked best beach town overall across the nation. In California, the top 25 beach towns, either coastal or a “stone’s throw” from the beach or by lakes included:

Malibu ranked at #134 in this survey.

What factors make a beach town ideal? Water temperature knocked down certain California beach towns, like Santa Cruz, Capitola and Richmond. While Santa Cruz, Daly City and Manhattan Beach are the beach towns that enjoy the lowest foreclosure rates in the state. Nowhere in the country compared with east coast beach towns for stellar nightlife. However Santa Cruz and Santa Monica were both listed in a six-way tie for beach towns with the most coffee shops.

In Orange County, San Clemente was number 20 on the list of best overall rankings, followed by Newport Beach at 24, Lake Forest at 32, Dana Point at 45, Laguna Beach at 46 and Seal Beach at 53.

Property costs was a high factor for determining if a beach town was “livable.” In California, beach towns, as with everywhere, enjoy a “cyclical market,” Corolito said.

Many beach towns have seasonal populations may be susceptible to economic downturns, Corolito explained. Those downturns are a factor whether you own a beach rental or second home property. But not everyone makes a home purchase with their head. Life on the beach, for Professor of Global Environmental Politics Paul Wapner, is more of a “soul” thing.

“Buying a beach property is to choose to live in the midst of nature, to be amazed by the changing character of sea, moon, stars and so forth,” Wapner said. However, rising sea levels may make some beach properties more vulnerable than others.

On the whole, all the science points to the inevitability of rising sea levels, Wapner said. Climate change includes more intense storms, and other climate-related intensities such that buying beachfront properties is increasingly becoming a gamble.

Would living by the beach be worth that gamble to you? Let us know! and where is your beach?