While You Were Sleeping, Sandra Bullock Was Building Her Real Estate Empire 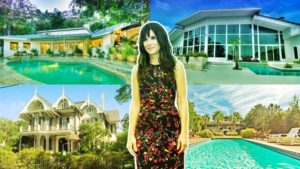 Actress Sandra Bullock’s approachable, big-screen appeal has made her one of the highest-paid actresses in Hollywood, with a reported net worth of $200 million. In turn, the “Ocean’s 8” star has plowed some of her hard-earned cash into real estate. This, of course, piqued our interest.

The Oscar winner recently made housing headlines with the $2.93 million sale of an investment property in Los Angeles. Bullock had rented out the charming home in Hollywood Hills West for years, for $15,000 to $18,000 a month, Variety reported. She had purchased the home through a trust for $1.49 million in 2001.

The 3,000-square-foot, three-bedroom rental offered an eat-in kitchen, skylights, and a pool. Located just behind the famed Chateau Marmont Hotel, it’s down the street from actress Cameron Diaz.

So we decided to crash headlong into the holdings of the 54-year-old A-lister.

Bullock starred in the 1998 rom-com “Hope Floats,” which was partly filmed in Austin, TX.

She wound up putting down roots here, even opening an office of her L.A.-based production company. She reportedly owns several homes in the area.

In 2004 she won a lawsuit against a contractor who built her an “unlivable” lakefront home in the late 1990s. She never moved into the place and told Good Housekeeping in 2000 that she oversaw much of the construction of her dream home that turned into a nightmare.

“It’s addictive to me. I love to do a lot of hands-on stuff,” she said. “But now I know all about construction, so no one can rip me off.”

At the time, she was reportedly commuting between Austin and Los Angeles, renovating a mansion in L.A. (more on that later), and hoping to permanently relocate to SoCal to focus on her life with her newly adopted son, Louis.

On the heels of her 2010 divorce from motorcycle builder Jesse James, Bullock turned to retail therapy, purchasing a “legendary” estate in Beverly Hills, CA, for $16.2 million, Variety reported.

The home had previously been owned by Marlo Thomas, David Geffen, and Hard Rock Café co-founder Peter Morton. Bullock embarked on a renovation to make the home her permanent digs.

The 4.1-acre property includes an 8,110-square-foot Tudor with eight bathrooms and seven bedrooms, including a master suite with fireplace, sitting room, and dual baths. There’s also a paneled dining room, home gym, and “serious” security system, Variety noted. (Perhaps it wasn’t serious enough: Bullock had a terrifying encounter with a stalker on her property in 2014.)

Bullock also picked up two units in the celebrity-filled Sierra Towers in West Hollywood. She purchased the first one in 2014 for $3.35 million. Previously owned by actor Matthew Perry, the furnished high-floor condo was offered earlier this year for $22,000 a month.

Bullock picked up the second, larger unit on a lower floor in an off-market deal for $5.13 million, according to Variety.

While they were married, Bullock and James in an oceanfront estate in Sunset Beach, CA. After their divorce, James sold the property for $4.5 million. The remodeled Mediterranean came back on the market for $5.4 million in May, but has since been reduced to $5 million.

Of course, you can’t be a movie star without having addresses on both coasts. In the early 2000s Bullock reportedly purchased a small townhouse in downtown Manhattan for the not-very-small price of $3.35 million.

Built in 1899, the 3,000-square-foot, single-family home, according to the website Sohostrut, is estimated to be “probably worth around $12 million today.” Another savvy buy by Bullock!

Island escapes are ideal for high-profile celebrities who want to vacation outside the Hollywood spotlight. In 2001, Bullock snagged a 3,400-square-foot, plantation-style home on Georgia’s Tybee Island for $1.5 million. (She later won an Oscar for her role in 2009’s “The Blind Side,” which was filmed entirely in the Peach State.)

Due to a hectic schedule, she isn’t able to spend much time at her Georgia getaway, which is probably why it’s been available for rent. Going for $1,400 a night with a four-night minimum, the spacious home sleeps 12, with four bedrooms, two baths, and a pull-out couch.

In 2007, the actress starred in the mystery “Premonition,” which was filmed in Louisiana, with a good chunk of the movie shot on a soundstage in New Orleans.

Through a trust, Bullock acquired a glorious Victorian in the Garden District in 2009 for $2.25 million. Known as the “Swiss chalet house” and built in 1876 by William Freret, the elegant residence features 6,174 square feet with ornate details, columns, and moldings.

The vintage charmer is located near homes owned by John Goodman and Nicolas Cage, as well as a residence once owned by author Anne Rice. Bullock also has ties to the area: Her two adopted children come from Louisiana.

Bullock has also adopted the A-lister habit of heading to Jackson Hole, which is known for its winter sports and relaxing atmosphere. She picked up 5 acres, which come with a ski house and “equestrian center,” according to the Hollywood Reporter.

The cozy three-bedroom log cabin is surrounded by firs and aspens. Details are scant, but we know the star spends time there, as she made headlines for heading to the snowy locale for her 50th birthday.