Why Malibu Real Estate Has Been Such a Great Investment 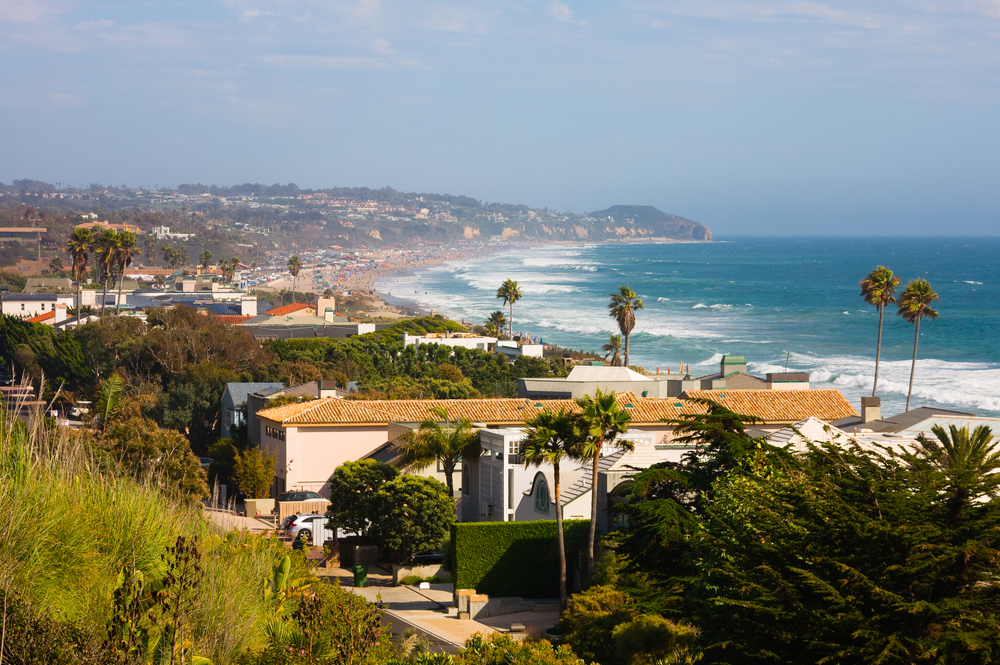 The median price of a home in Malibu in 1970 (representing predominantly beach homes that existed then) was about $46,000. This year, the median is hovering around $3.6 million. It has increased almost 80 times higher.

Of course, the comparison is partly deceptive. After all, real estate is an investment usually made with considerable leverage, as opposed to gold or stocks. In 1970, the typical house was bought with 20 percent down payment. So only about $9,000 of cash was necessary to make the Malibu real estate investment. The return is about 400 times higher, actually, with the $9,000 now growing to a few million.

Which would you rather have, an investment that grows 33 times, or 28 times, or 400 times?

If the same money had been invested in a seven percent interest-bearing instrument, it would now be 24 times higher.

Malibu real estate has been an extraordinary investment over time—superior to almost any longterm opportunity that has existed in the world. To make the case even further, the homes that were measured in 1970 were half beach homes, while now the tally is much more diluted by landside homes that weigh down the median to the $3.6 million level. Beach homes alone have a median of about $8 million, so a handful of people in Malibu have seen their $9,000 investment on the beach in 1970 grow about 1,000 times higher.

It may be easy to claim that all real estate in California has had such returns, but that is not true. Malibu is a special case. Literally, Malibu has grown exponentially better than the typical location this past half century.

The adjacent chart makes the point. The chart shows how the median price in Malibu has risen compared to the rest of the state. In 1970, Malibu had a median price of $46,000 while the entire state, including every type of residential real estate, was $25,000. Malibu was only 1.8 times higher.

At this writing, the California median is floating near$550,000, while Malibu, which has seen a healthy dose of about 160 sales through two-thirds of the year, is at a median price of nearly $3.6 million. (The median price is the special spot where half the homes sell for more and half sell for less.)

Malibu was once less than twice as high as the rest of the state. Now it is approaching seven times higher. The key takeaway is that Malibu values grow exponentially compared to other real estate. 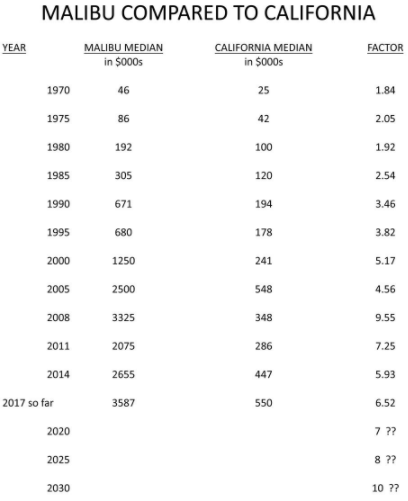 Three notable items from the chart:

The only anomaly from the progression was during the depression of real estate from 2008-11. Malibu actually fared better than the rest of the state, not dropping quite as precipitously. During 2008, Malibu values were reaching their all-time high while the rest of the state was collapsing. I recall the handwriting on the wall in block letters for many Malibu homeowners trying to sell at the time who ignored the clear forecast. In 2009, Malibu came back to earth quickly, dropping 28 percent in one year.

The only time the rest of the world keeps up with Malibu is during particularly hot markets, such as the late 1970s, the late 1980s and the early 2000s. During those times, when all real estate is skyrocketing, Malibu moves ahead at a slower pace.

Lastly, there is no reason to expect this trend will not continue. At some point, Malibu may hit 10 times the value of the rest of California.

It is obvious that Malibu real estate is extremely expensive. For 99 percent of those that inquire, that is where the story ends. They give up, losing sight of the big picture while their breath is taken away by the prices, and their financial capability defeated. For the one percent that make the leap, take the risk, make the sacrifice, overcome the inspection report, let alone have the means, the great investment returns eventually arrive.

Why is this the case? As with all investments, the very top of the pyramid points ever higher than the base can expand. As is also the case with fine art, the best of automobiles, and other prized assets, eventually it is not the practicality of owning the possession, it is the collectability factor. There is a reason why the mega-wealthy hoard real estate, in Malibu and other high-end places. Not to live in 10 houses at one time, but simply to own them. The demand for such elite possessions never stops growing. The supply cannot keep up. And thus the exponential result of a built-in free market system is that, quite simply, demand almost permanently outpaces supply.

If you saw a lot of Malibu real estate like local Realtors do, the fine art ingredient would be evident. The best of real estate, whether being in Malibu versus the rest of the state, or even within Malibu itself with its dozen different price points, reveals the fine art that it is. Along our shores, the very most talented people design the homes and outside spaces, as well as decorate the interiors with stunning finishes.