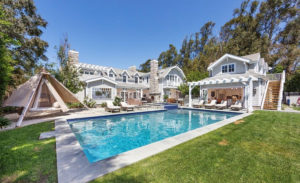 Not quite two months after Relativity Media filed for Chapter 11 bankruptcy for the second time in three years, reportedly with more than half a billion dollars in debt, the company’s once high-flying co-founder and CEO Ryan Kavanaugh has listed his Malibu, Calif., estate at $10.68 million. The audaciously tenacious film producer and financier, now married to his third wife, former Sports Illustrated swimsuit model Jessica Roffey, acquired the Point Dume property in the fall of 2013 for $7 million, while married to his second wife, ballet dancer Britta Lazenga, from famously germophobic game show host Howie Mandel. Avid Tinseltown real estate watchers will recall this is not Kavanaugh’s first time on the bull at the real estate rodeo with his comfortably luxurious Malibu spread having had it for sale in 2016 at prices that started at $9.975 million and dipped to $8.925 million before it was taken off the market. Described as “newly renovated” and “meticulously detailed,” the stone-accented and shingle-clad, gambrel-roofed Nantucket style residence sits behind gates on just over an acre of landscaped grounds with five bedrooms and 5.5 bathrooms in 5,336 square feet. A detached two-story poolside guesthouse with attached single-car garage provides two self-contained apartments, each with bathroom and kitchenette.

Relaxed living spaces include a double-height combination living and dining room with fireplace and French doors to the swimming pool terrace and a roomy cook’s kitchen replete with butler’s pantry, marble counter tops and every culinary bell and whistle money can buy. The kitchen flows into a family room with a fireplace flanked by built-ins and a sunny dining nook next to a huge picture window with a long view towards the ocean over the backyard. Additional amenities include a cozily compact home theater that seats ten, a fitness room and an office/den with soaring, wood-beamed ceiling. Guest bedrooms are ample and en suite while the master bedroom, with fitted walk-in closet and marble bathroom, has French doors to a private terrace with TV-surmounted stone fireplace. The elevated perch, where a wacky, nest-like swinging lounger hangs from a muscular trellis, allows for a panoramic view that, on a clear day, extends clear over the Pacific Ocean to Catalina Island. A spacious, stone-paved terrace that connects the main house to the guesthouse includes a lounge area with stacked stone outdoor fireplace, an extensive grilling area and al fresco dining space and a saltwater swimming pool and spa that gives way to a great sweep of lawn bordered by neatly trimmed white roses.

Kavanaugh, who continues to own three luxury condos in the same five-unit complex in downtown Santa Monica he purchased in three separate transactions between mid 2015 and early 2016 for a total of $9.3 million, previously, briefly and to his financial detriment owned a 9,094-square-foot mansion in a genteel gated enclave in L.A.’s Brentwood area that he set out for sale at $10.5 million in April 2017 and sold about four months later for $9.3 million, a wee bit above the final list price of $9.25 million but, unfortunately for Kavanaugh, a bank account brutalizing $450,000 below the $9.75 million he’d in-hindsight rather unwisely shelled out for the six bedroom and six full and four half bathroom mansion just over a year earlier.